At CSEP 2016 in Victoria, B.C. a number of CSEP award recipients were recognized for their research and contributions in the field. Congratulations to all of the award recipients! 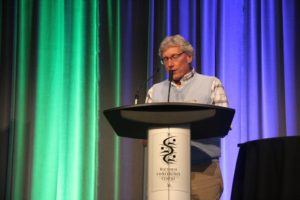 Dr. Mark Tremblay received his Honors B.Comm (Sports Administration, 1984) and Honors BPHE (1986) from Laurentian University, and his MSc (1988) and PhD (1994) from the Faculty of Medicine, Department of Community Health, University of Toronto, and was awarded an Honorary Doctorate of Letters by Nipissing University in 2011.

Dr. Tremblay is the Director of the Health Active Living and Obesity Research Group (HALO) at the Children’s Hospital of Eastern Ontario Research Institute and Professor of Pediatrics in the Faculty of Medicine, University of Ottawa. He is a Fellow of the American College of Sports Medicine, former Chief Scientific Officer of Active Healthy Kids Canada, Chair of the Active Healthy Kids Global Alliance, Chair of the Canadian Physical Activity Guidelines Development Committee, and former Dean of Kinesiology at the University of Saskatchewan.

Dr. Tremblay has published more than 330 papers and book chapters in the peer-reviewed literature. His h-index is 48 and his published research has been cited >10,000 times according to Scopus. He has delivered over 700 scholarly conference presentations, including more than 140 invited and keynote addresses, in 20 different countries. Dr. Tremblay received an honorary doctorate from Nipissing University and the Queen Elizabeth II Diamond Jubilee Medal for his leadership contributions to healthy active living in Canada. His tireless contribution to the study and promotion of physical activity is unequalled within Canada.

Dr Tremblay has shown a tremendous commitment to CSEP throughout his

career. After moving to the University of New Brunswick, Dr. Tremblay was the Director of the Fitness Assessment Centre and conducted STFA, CFA, CFC, and PFLC courses including supervising nearly 100 successful Professional Fitness and Lifestyle Consultant (PFLC) candidates. Dr. Tremblay chaired the CSEP STFA Technical Committee (1995-1997) and the CSEP National Fitness Appraisal, Certification and Accreditation (FACA) program (1997-99). Dr Tremblay also hosted the CSEP Annual Conference in Fredericton in 1998, where the first Canada’s Physical Activity Guides were launched with Health Canada. Over the years he has made important contributions to both the Canadian Physical Activity, Fitness and Lifestyle Approach (CPAFLA, 2003), and the CSEP Physical Activity Training for Health ( CSEP-PATH®, 2013) manuals.

For the past ten years Dr. Tremblay has served as Chair of the CSEP Physical Activity Guidelines Committee, and has overseen updates of physical activity guidelines for Canadians of all ages, the introduction of the world’s first evidence-based sedentary behaviour guidelines for children under 18 years, and most recently, the development of the world’s first 24-Hour Movement Guidelines for Children and Youth: An Integration of Physical Activity, Sedentary Behaviour, and Sleep (with other age groups yet to come). Taken as a whole, these guidelines have made Canada (and CSEP) a world-leader in the promotion of physical activity and a healthy lifestyle.

Apart from accomplishments within CSEP, Dr. Tremblay was instrumental in the re-launch of ParticipACTION in 2007 and spearheaded the creation of the Active Healthy Kids Canada/ParticipACTION Report Card on Physical Activity of Children and Youth. The Report Card is acknowledged as the authoritative report on the physical activity levels of Canadian children and youth, and has been emulated in dozens of countries, provinces, and cities around the globe. He also oversaw the development of the Canadian Health Measures Survey, Canada’s only nationally representative survey of a wide range of health behaviours and outcomes (including physical activity and physical fitness), which serves as an invaluable resource for both researchers and policy makers.

Internationally, Dr. Tremblay is a founder of the Active Healthy Kids Global Alliance and the Sedentary Behaviour Research Network. Dr. Tremblay’s extensive expertise and leadership is widely recognized by international policy-makers and organizations — those with a long track record and others who are ready to explore establishing public health policies in their jurisdictions.

Dr. Tremblay is an exemplary mentor and supervisor with a constant roster of doctoral students in his lab. Dr. Tremblay is a determined advocate for CSEP, and for CSEP Certified Personal Trainers® and CSEP Certified Exercise Physiologists® within the healthcare field. He expects that students and staff within his research group gain the CSEP certifications, attend and present at CSEP conferences, and sit on CSEP committees.

Dr. Mark Tremblay, in recognition of your outstanding accomplishments and distinguished service, the Canadian Society for Exercise Physiology is pleased to present you with its highest form of recognition, the CSEP/SCPE Honour Award. 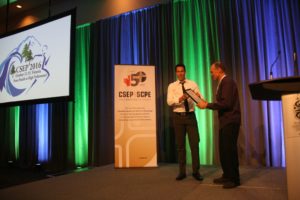 Jean-Philippe Chaput completed his PhD at Université Laval in 2008, followed by post-doctoral studies in human nutrition, physiology and sleep at the University of Copenhagen in 2010.

His research program is very diversified and covers the entire movement continuum (from sleep to vigorous physical activity) in different populations. Though Dr. Chaput completed his Ph.D. only 8 years ago he already has over 200 peer-reviewed publication showing exceptional research productivity (>50 papers have an impact factor >4). Not only is he productive, but his research is having an impact in academia and with the general public. Within academia his productivity can be seen by his h-index of 29 and the fact that his work has been cited more than 2,800 times according to Scopus. He has also been able to secure over 2 million dollars in research funding as Principal Investigator (PI) or co-PI, contributed to a large number of conferences around the world (>100 oral presentations), served on many journal editorial boards and advisory committees, and graduated 9 MSc and PhD students. Among the general public, Dr. Chaput is seen as the number one expert on sleep research and regularly makes appearances on TV, radio, and print media. His achievements far exceed his seniority.

Dr. Chaput’s research program focuses on healthy active living, with a specific interest on the relationship between insufficient sleep and obesity. He is known nationally and internationally as the expert in this area (>30 invited lectures). He has published >60 peer-reviewed articles on this topic (>800 citations) and has been actively involved in writing 2 successful grant applications aimed at examining the effects of sleep restriction on energy metabolism. He has made novel contributions demonstrating that lack of sleep is stressful for the human body and should be avoided for good health. He also reported for the first time that getting more sleep can protect against weight gain, and provided new evidence that adequate sleep is important to improve the treatment of obesity. Interestingly, the Canadian Obesity Network (the largest obesity organization in the world with more than 11,000 members) recently launched a set of practitioner tools – the 5As of Obesity Management – that highlight the importance of addressing sleep for successful weight management. As an advisory committee member, he played a key role in making sure that sleep was part of this practitioner tool.

Dr. Chaput has also made many other important research contributions. For example, he pioneered research discovering that screen-based activities are mentally stressful, metabolically challenging, and increase food intake. Dr. Chaput’s finding that mental work promotes overconsumption of food and glycemic instabilities has received considerable attention in the scientific community as well as in the media. He also published novel results illustrating for the first time that playing video games increases food intake in adolescents. This paper received the 2011 Sport Information Resource Centre (SIRC) Research Award, which recognizes outstanding sport research in Canada and acknowledges how sport research benefits the Canadian sporting community.

Dr. Chaput is a strong advocate for healthy active living in Canada and has shown significant commitment to CSEP, including being part of the steering committee for the development of the world’s first Canadian 24-Hour Movement Guidelines for Children and Youth: An Integration of Physical Activity, Sedentary Behaviour, and Sleep. 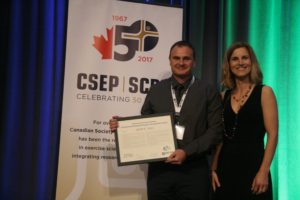 Gareth has been a longstanding member of the Canadian Society for Exercise Physiology, first certified as a CSEP STFA in 1991 and then a CSEP CFA in 1994. Throughout the past 25 plus years, he has made significant contributions to the CSEP-PSP™ through his role on numerous committees, as a member of the CSEP Board of Directors, and as one of CSEP’s most active CSEP-CPT and CSEP-CEP Instructor-Examiners. These contributions to CSEP, along with his many contributions to the field of Exercise Science through his research and practice, are what makes Dr. Jones such a worthy recipient of this award.

Since the mid-1990s, Gareth has been published close to 200 times in a combination of Peer Reviewed Journals, Manuals, Abstracts and Research Presentations, to name a few. Through his research, as well as his position as Director of the Canadian Centre for Activity and Aging (2002-2005), Gareth has, and continues to, contribute to the understanding and programming approaches for physical activity in older adults.

From 2009-2011, Gareth served as a volunteer member of the CSEP Certified Exercise Physiologist® (CSEP-CEP) Technical Sub-Committee, during which he also took on the role of Acting Chair for six-months. Gareth was then elected to the CSEP Board of Directors as the CSEP Member at Large from 2010-2012. After his time on the CSEP Board, Gareth continued his volunteer role with CSEP as the CSEP-CEP Technical Sub-Committee Chair from 2012-2014. Throughout this time Gareth’s contributions were integral to CSEP’s success during a period of transition for the organization.

Most recently, Gareth has been instrumental in growing CSEP’s online offerings for both candidates and members through the development of online modules in Exercise and Chronic Disease and Exercise Prescription for Older Adults.

Dr. Jones has been, and continues to be, a strong supporter and champion of CSEP and the CSEP Professional Standards Program™. Throughout his career as both a researcher and educator, Gareth has demonstrated and exemplified the level of commitment to the Gold Standard in exercise science and personal training upheld by CSEP.