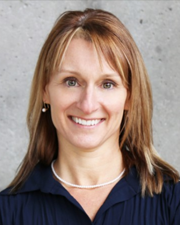 Dr. Jennifer (Jenn) Jakobi has made a significant volunteer contribution to CSEP through her work on the Board of Directors, various working groups and as an Associate Editor for CSEP’s journal, Applied Physiology, Nutrition, and Metabolism (APNM).

Jenn joined the Board in 2009 as Voting Member at Large (now called Director, Academic). She served in that position for two years becoming familiar with the organization, followed by a term as Knowledge Translation Committee Chair from 2011-2013. In 2013, Jenn shouldered the momentous responsibility of CSEP Treasurer, continuously supporting the organization through a time of considerable transition.

Jenn did not encounter an easy task in her first days as Treasurer in October 2013. Earlier in the year the Board fulfilled a requirement to meet the new Canada Not-for-Profit Act requirement to restructure the Board and approve new bylaws, while consolidating its certification and membership operations. It was a period of difficult decisions with regard to strategic investments into CSEP’s future growth and stability. The organization’s financial history indicates that these investments were made, preceding a period of expansive growth, which also had to be managed. This careful oversight cannot be underestimated. Jenn’s appreciation of the big picture, conscientious inquiry, and championing support for the CSEP staff team directly influenced six consecutive years of continued growth and prosperity from 2014-2019.

Dr. Jakobi’s expertise lies with exercise neuroscience and she, with colleagues, was instrumental in facilitating the continued growth of the Exercise Neuroscience Group (ENG) established by her mentor, Enzo Cafarelli in 1995. In 2016, Jenn proactively opened doors for CSEP’s membership and subsequent involvement with the European College of Sport Sciences (ECSS). Her selfless commitment to supporting APNM as an Associate Editor since 2012 is further testament to her dedication as she expertly coordinates a large number of manuscripts each year and is an active contributor to the APNM Editorial Board.

After completing her second consecutive term on the CSEP Board, Jenn served as co-Chair for the CSEP 2019 conference, hosted jointly by the University of British Columbia and University of British Columbia Okanagan. Seen not as only as one of the most equitable and diverse conferences in CSEP history, the event drew over 600 delegates and was a tremendous success for the organization.

We are grateful to Jennifer for her dedication to CSEP and the profession.

UBC Okanagan News: Exposing kids to STEM is important, even during a pandemic, says UBCO prof